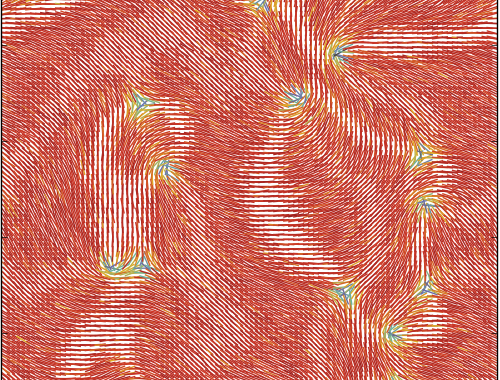 Most of my projects investigate some microscopic object (or objects) such as polymers or microbial swimmers immersed in a simple background fluid. Since it’s the dynamics of the objects that we’re typically interested in, we treat the fluid as simply as possible. In order to do this, we often use the MPCD method (described here).

Dealing with flowing liquid crystals is notoriously difficult. When the liquid crystal is just the background fluid to the dynamics of the colloids, polymers, or microbes, significant computational effort must be spent to simulate the background. This is why we developed a computationally efficient and versatile multi-particle collision dynamics (MPCD)-based algorithm to simulate nematohydrodynamic baths.

Our key realization was that the MPCD algorithm isn’t limited to solving the Navier-Stokes equation for momentum transport in a fluid, but can really solve any transport equation so long as a suitable “collision” operation (now more generally referred to as an “exchange”) can be defined and the continuum field of interest can be discretized as a particle property. We gave each point-like MPCD particle an orientation that would interact by an order-collision operation based on Maier-Saupe theory for liquid crystals in equilibrium.

This simple algorithm works very well. It is accurate in 2D and 3D; it reproduces defect dynamics; it has an intrinsic elasticity; it can have tumbling or shear aligning regimes when it flows; and it can handle complex boundary conditions and mobile macromolecules, colloids and swimmers.

Error: Twitter did not respond. Please wait a few minutes and refresh this page.